PsyGeNET database integrates information on psychiatric disorders and their genes (Gutiérrez-Sacristán et al.,Bioinformatics 2015). This second release of PsyGeNET contains updated information on depression, bipolar disorder, alcohol use disorders and cocaine use disorders, and has been expanded to cover other psychiatric diseases of interest. The database has been developed by automatic extraction of information from the literature using the text mining tool BeFree (http://ibi.imim.es/befree/), followed by curation by experts in the domain.

Each psychiatric disorder class has been defined using concepts from the UMLS Metathesaurus. The information on the gene-disease association is then referred to each specific disease UMLS concept.


PsyGeNET data is classified in Psycur15 (from the first release of PsyGeNET) and Psycur16 (current 2.0 release). Note that all the information contained in the database has been curated by experts.

Psycur15: Genes associated to alcohol use disorders, bipolar disorders and related disorders, depressive disorders and cocaine use disorders. It contains 1537 associations between 579 genes and 32 psychiatric disease concepts. The information has been extracted from the literature by text mining, followed by expert curation. The curation process has been described in Gutiérrez-Sacristán et al.,Bioinformatics 2015, from data extracted from MEDLINE abstracts from 1980 and 2013.

Table 2. Distribution of gene, disease and unique associations provided by each source 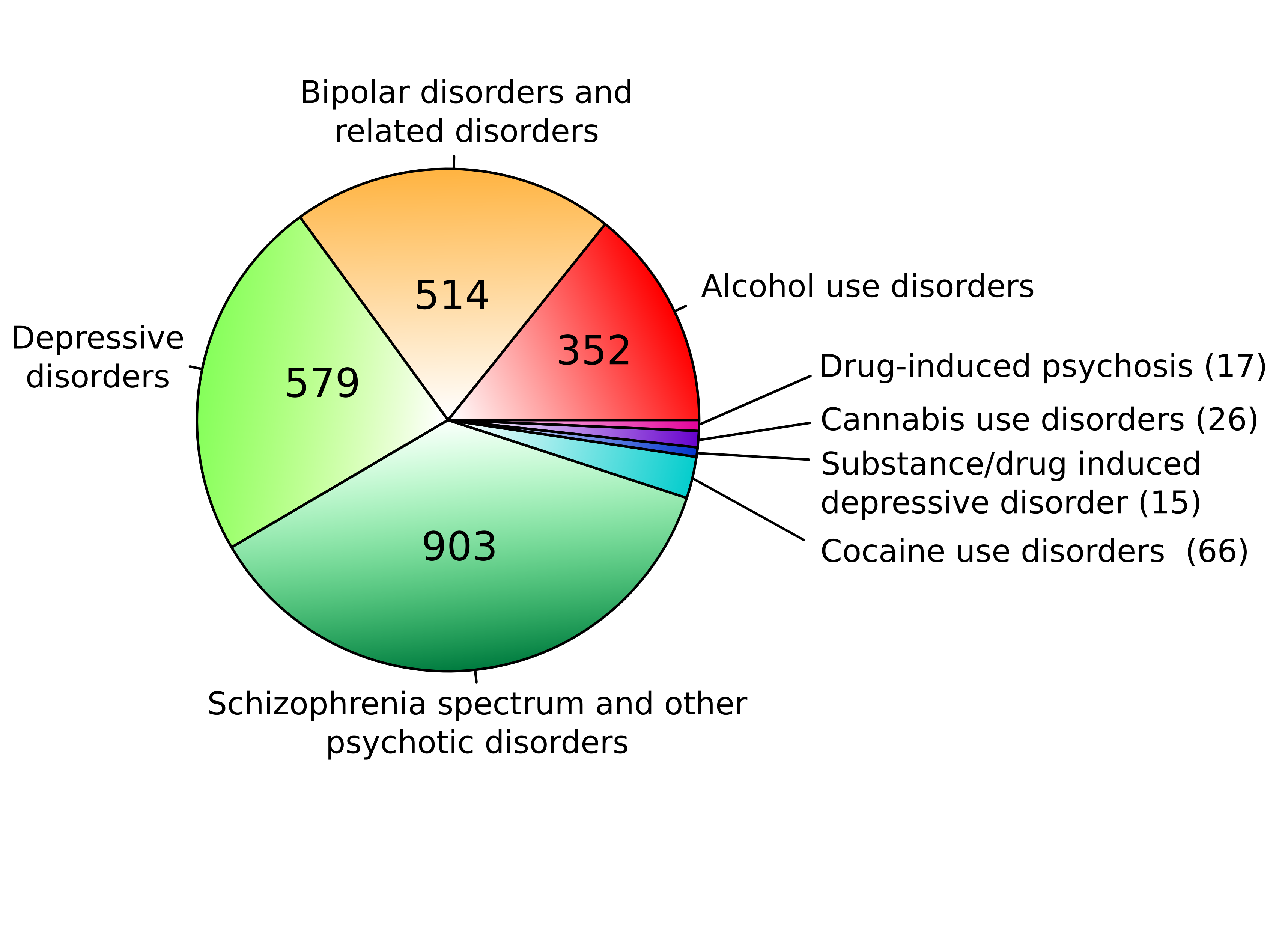 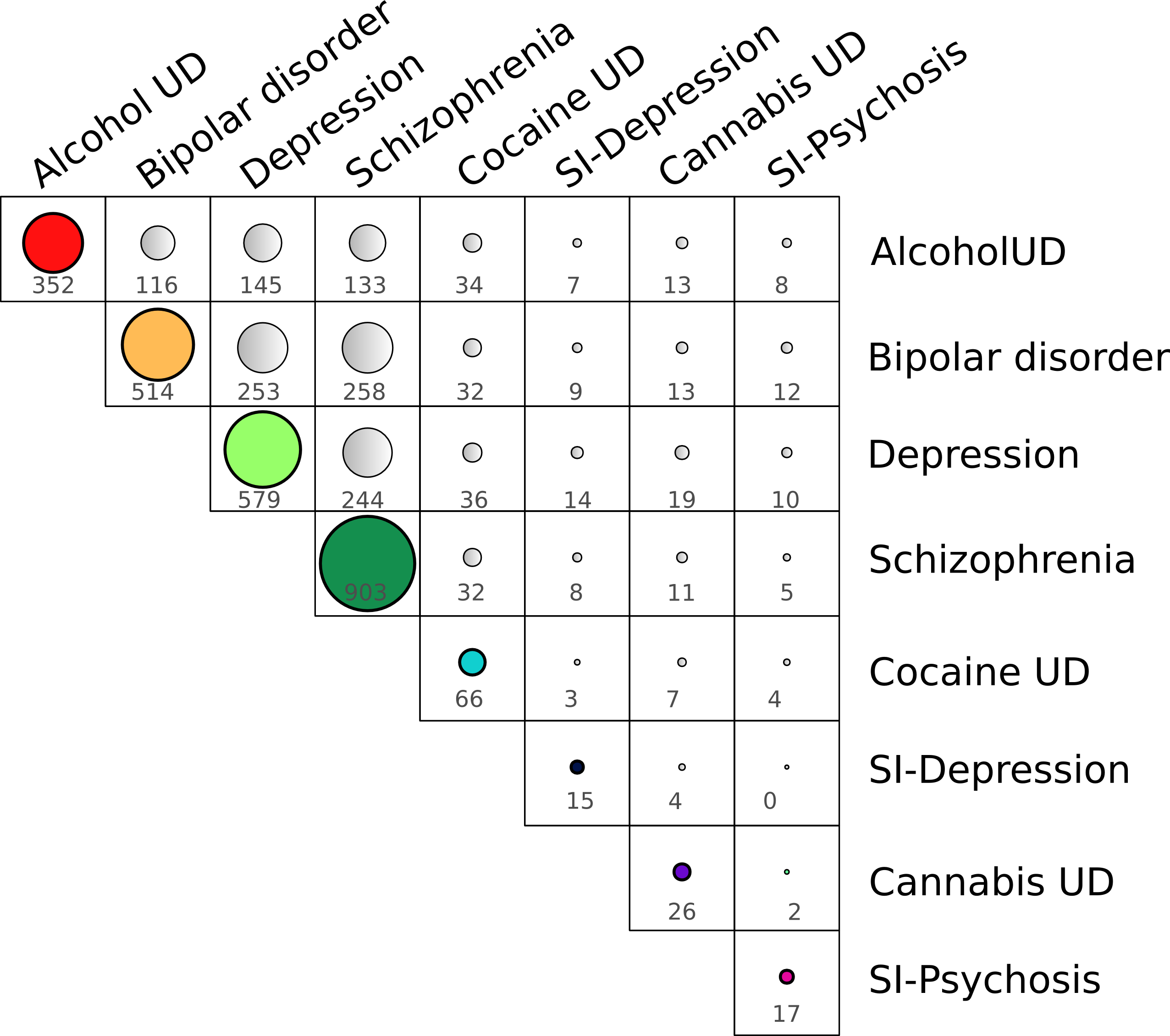 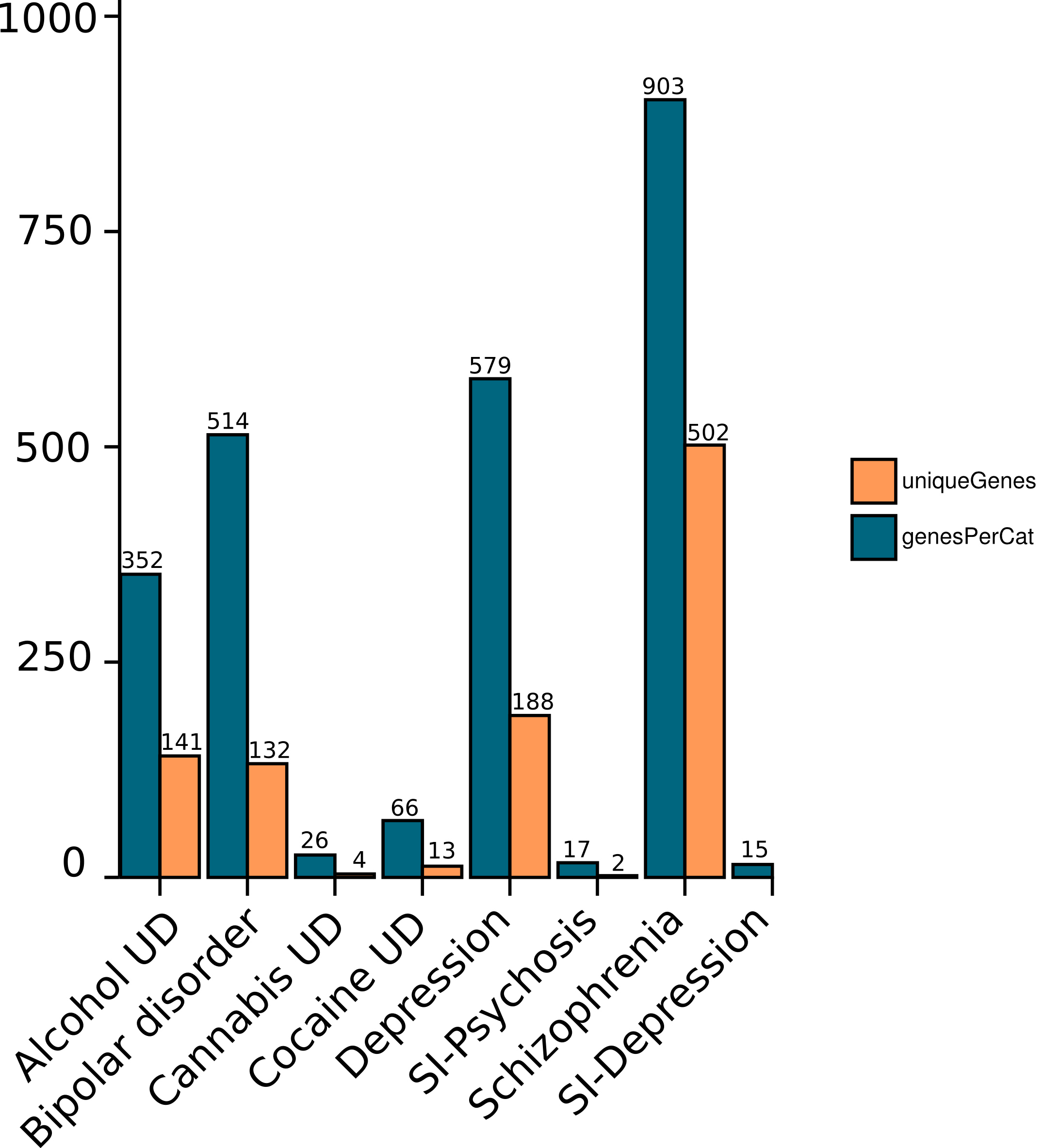 Genes disease association according to each disease class. 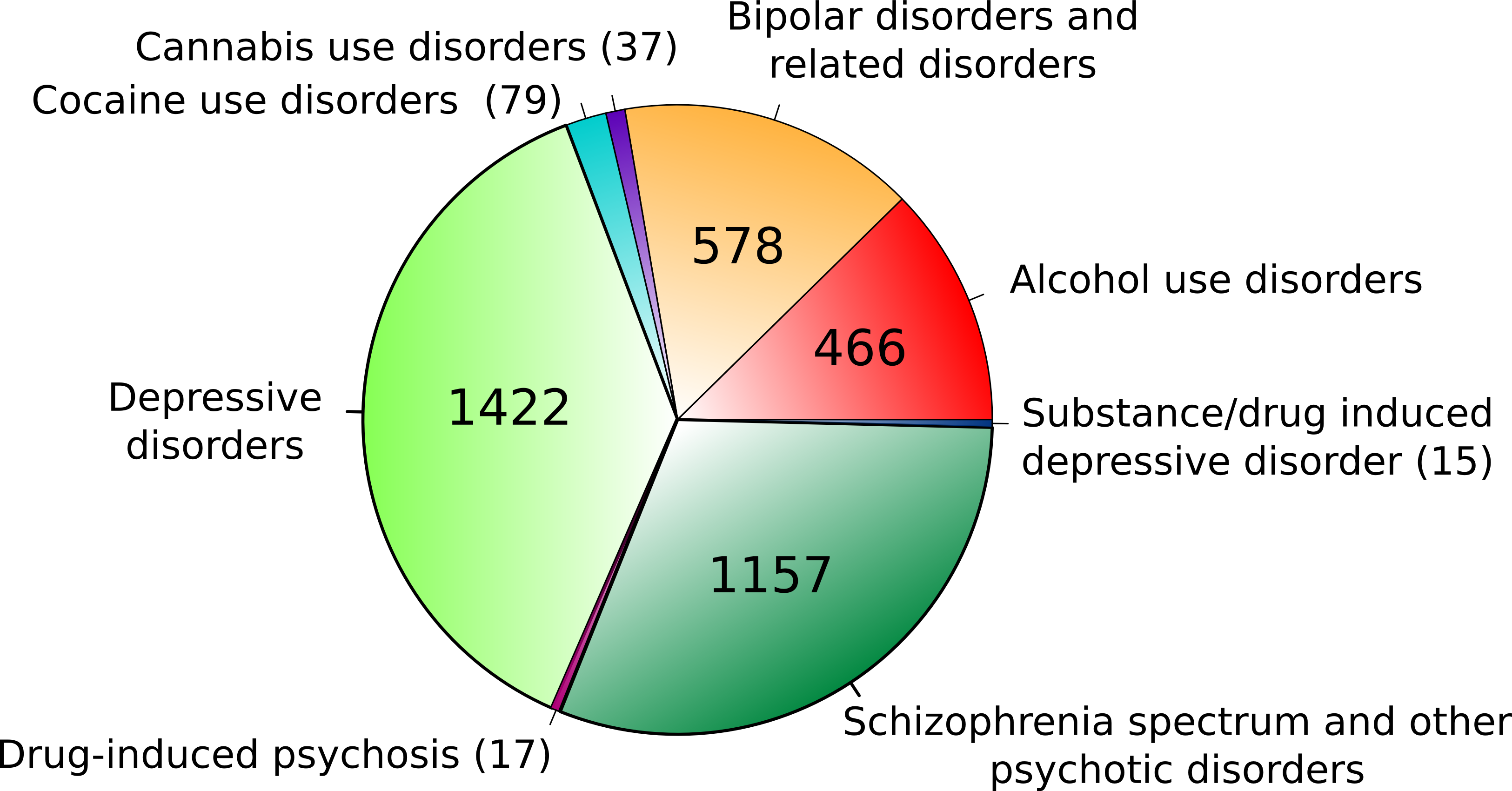 (*) All the previous graphics have been generated with psygenet2r package.


During curation of gene-disease associations (GDAs), we found publications that supported the association between the gene and the disease while other works found just the opposite (that the gene is not associated to the disease). The latter is what is generally referred as a negative finding in the literature. In PsyGeNET we think that it is important to keep track of both “positive” and the “negative” findings, and let the user make their own judgements based on the available evidence. Thus, for each GDA and each supporting publication, we include the Association type to provide this information. According to the evidence, there are two types: “Association” and “No Association” (e.g. the “negative findings”). This information is available in the “All associations evidences” tab.

This information is available in the “Summary of All Associations” tab in a numeric format. Note that given a set of genes of interest, psygenet2r package allows to visualize the evidence index in a heatmap where genes are located in the X axis and disorders in the Y axis, and the cell color will be red, yellow or green according to the EI value (more details in R package: psygenet2r). 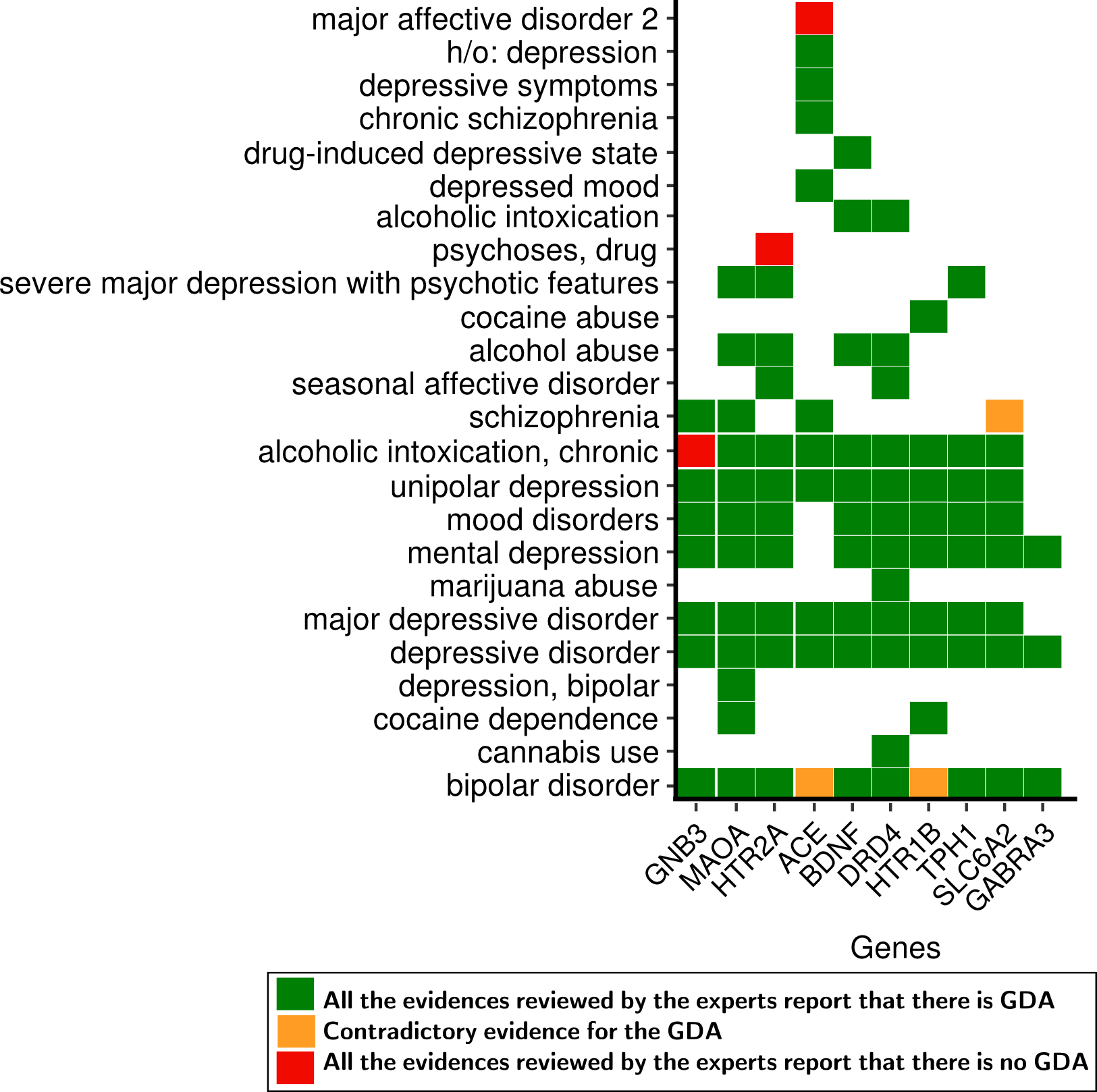 The formula of the Disease share is as follows:


Genes
The vocabulary used for genes in the current release of PsyGeNET is the NCBI Official Full Name, NCBI Entrez gene identifiers as well as the Uniprot accession. In addition, genes are classified according to the Panther protein ontology .

For the update of the PsyGeNET database the process that has been followed involves: i) the recruitment of a team of experts to curate the information extracted by text-mining; ii) the extraction of information of gene-disease associations (GDAs) from the literature using the text mining system BeFree (Bravo et al., 2015), iii) the development of a curation workflow iv) the development of a web-based annotation tool in order to facilitate the curation task v) the definition of detailed guidelines to assist the curation task.

We put in place a curation workflow including a pilot phase and two curation and analysis phases (see Figure 1). During the pilot phase, the initial training of the curators was carried out including how to use the curation tool. After this process both the curation tool and the annotation guidelines were improved and the first curation phase was launched (Curation Phase I), to evaluate 2,507 GDCAs identified by text mining and supported by 4,065 publications (from 1980 to 2015). The results of the curation were analyzed to estimate the inter-annotator agreement at the level of abstract. The validations for which an agreement was not found in Curation Phase I are then reviewed by a third expert during Curation Phase II (results not reported here). Four experts participate in this phase. Only the validations for which agreement of at least 2 experts was found have been included in the database. For more detailed information on the process check this publication: Gutiérrez-Sacristán et al. Text mining and expert curation to develop a database on psychiatric diseases and their genes. Proceedings of the 7th International Symposium on Semantic Mining in Biomedicine. Potsdam, Germany, August 4-5, 2016 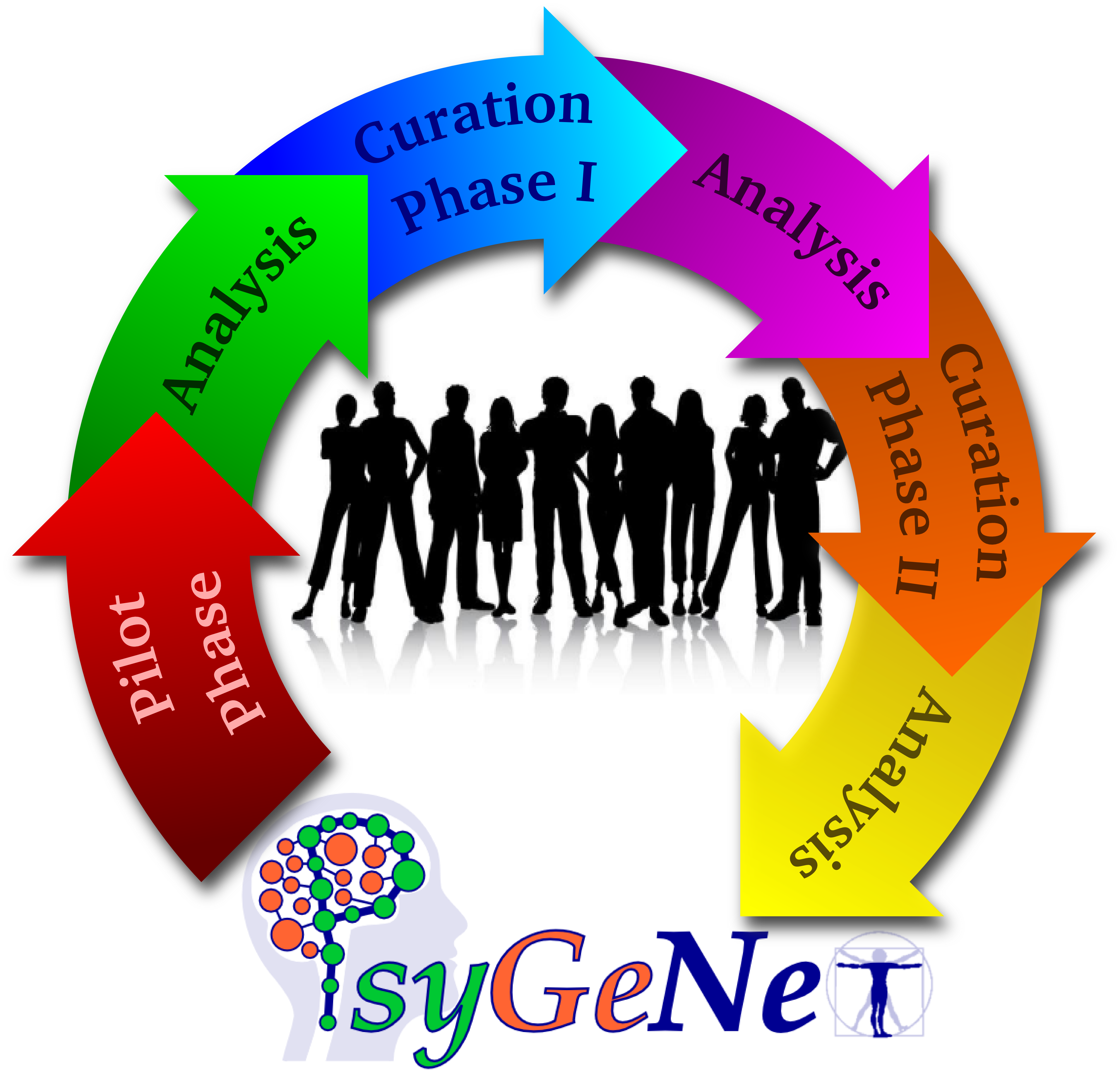 
A team of 22 experts from different domains (such as psychiatry, neuroscience, medicine, psychology and biology) was recruited from the Spanish Network of Addiction and other collaborators of the coordination team (Research Group on Integrative Biomedical Informatics (GRIB)) to participate in the curation process.